Putting Gender, Care and Climate Justice at the Heart of post-COVID19 Recovery

Complex crises facing the world in recent times have thrown into sharp relief the unsustainability of the global economy which has been undergirded by women’s unpaid care and domestic work and over-exploitation of natural resources and extractivism. COVID19 has particularly exposed the dependence of all economies on the undervalued resource of ‘care’, both paid and unpaid. What would an alternative post-COVID economy look like that prioritized the care of people and planet? How do we get there?

Somali has recently joined the IGD as a Research to Practice Associate. She is a global human rights and gender equality expert, with experience working across Australia, the UK at the OECD and at the United Nations. Somali currently leads a range of gender equality initiatives and is also an Adjunct Associate Lecturer in the Faculty of Arts & Social Sciences at the University of Sydney, and a board member of ACON. She has a BA (UTS) and a Master of Science (Human Rights) (London School of Economics and Political Science).

Before commencing as a Director at the UNSW Institute for Global Development, Sarah spent almost 10 years leading research institutes within the United Nations. This included as Director of UNICEF’s Office of Research in Florence, Italy and Director of UNRISD in Geneva, Switzerland. Her own research has focused primarily on China, following its social and economic transformations over more than 3 decades.

Writing for GoingGlobal@UNSW gives your ideas exposure to the broader development community. Have an idea to share?

Today, decision-makers are grappling with the question of what kinds of policies and investments will be necessary to recover from the economic disruption of COVID19, particularly the shattering levels of unemployment facing the world. There are choices between continued stimulus and austerity, with a clear temptation to want to ‘snap back’ to the status quo.  In different contexts, this could mean reorienting to high-polluting or extractive industries, or investment in large infrastructure projects. But what are we ‘snapping back’ to? Do we want to retain economic policies and choices that wreak havoc on the environment, create a concentration of wealth and resources in the hands of a few, while denying decent work for too many? Can we use the opportunity today to make decisions that lead down a different path?

Some aspects of the COVID19 economic slowdown have indicated that a slower and more sustainable economy is possible. Important shifts have occurred in our patterns of consumption and production, and the environment has responded strikingly fast to the reduction of emissions, waste, travel and environmentally harmful human activity. Compared with a year ago, levels of pollution in New York are reduced by nearly 50% because of measures to contain the virus, and similar declines in pollution and greenhouse gas emissions can be seen across all regions (Henriques 2020). While some of the changes induced by COVID19 could possibly be retained to support progress towards global climate change commitments, it is more likely that the overriding pressure to put people back in jobs will increase emissions and pollution, once again reinforcing the tensions and trade-offs between jobs and the environment. 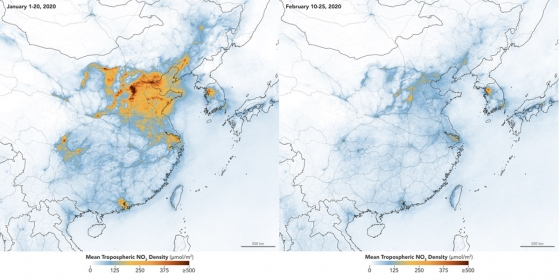 These maps show NO2 across China from January 1–20, 2020 (before the quarantine) and February 10–25 (during the quarantine). Credit: Australian Academy of Science. Image adapted from: NASA.

COVID19 has also brought to the fore, not for the first time but more visibly than in other recent economic crises, the underlying gendered structure of our economy. The pressure on health and aged care services and disruption to education systems has made clear that care work – paid or unpaid – is ‘essential work’, yet it remains undervalued and often invisible (Staab 2020). In both developed and developing countries, the work of feeding families, and caring for children, the elderly and sick, is disproportionately shouldered by women.  In the absence of basic infrastructure and services – from water and sanitation, to transport and health facilities - in low income contexts, this work is intensified. Women – and often those from more disadvantaged or marginalised communities - primarily bear the cost of the underinvestment in services and the undervaluation of care work, both through low wages and poor conditions in paid care work, and through overwork and physical and mental depletion in an effort to combine heavy paid and unpaid care workloads. The work of care is critical for the sustainability of society and the economy, yet currently unsustainable for those who shoulder this burden.

As the health crisis transforms into an economic crisis, with mass unemployment and widespread economic insecurity, as always impacting most heavily on those already marginalized, the need for policies and investments to ensure an adequate standard of living through the creation of decent work and comprehensive social protection for all has never been a more urgent priority. The big challenge now is to tackle these inter-related challenges of getting people back to work, creating jobs, investing in social protection, and recognising the importance of care in the economy, while also creating a pathway for transition towards an environmentally sustainable economic model.

The potential of a ‘gender just’ transition

The concept of ‘just transition’ has gained currency in thinking about the transformations needed to achieve a sustainable future for the planet and its people, globally articulated as the 2030 Agenda for Sustainable Development. The idea of a just transition came from an early trade union demand for public action to facilitate a transition to a low carbon economy while ensuring the costs and benefits are equitably shared. A just transition has two main dimensions: in terms of “outcomes” (the new employment and social landscape in a decarbonized economy) and of “process” (how we get there). A just transition is too often simplified to ‘green jobs’ or ‘social welfare’, when it is really about the integration of macroeconomic, environmental, industrial, labour and social policies to ensure decent work, poverty eradication and social justice in a low carbon economy.

The recovery from COVID19 provides an opportunity to incorporate these elements into a ‘just’ and sustainable recovery. As governments rush to invest in policies to stimulate the economy, for example through announcements of infrastructure investments, ‘green jobs’, or incentives or bailouts for particular industries, the question of who benefits and who loses from these initiatives is increasingly urgent. The most important lesson from the response to the 2008 financial crisis is that policies are never benign in their impact – without careful design, they will inadvertently not only leave people behind, but push people behind (Elson 2018). In this respect, the principles of a ‘just transition’ not only put the spotlight on environmental sustainability in policy decisions, but also on social dimensions such as multiple and intersecting forms of inequality and poverty. 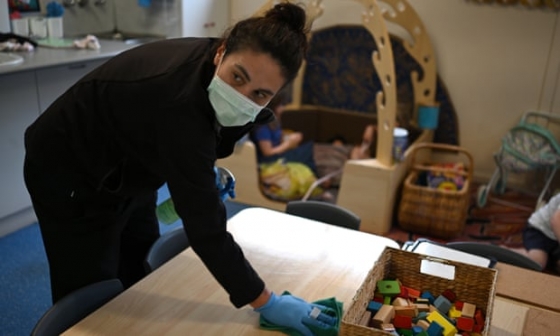 Women are likely to work in health and education industries, carrying the burden of COVID19 response. Credit: Dean Lewins/AAP via The Guardian

While the concept of just transition holds significant potential as a set of guiding principles for the post-COVID19 recovery, ensuring a focus on the gender dimensions will be critical. The actions of some governments are already set to further entrench gender inequalities in the economy and the undervaluation of women’s work by, for example, investing in male dominated construction industries while removing support for care services. The neglect of the care economy, both paid and unpaid, as part of a just transition and COVID19 recovery is likely not only to decrease women’s labour force participation and add to their workloads but also to reduce countries’ resilience in the face of future health crises. On the flip side, investments in care and social services, much like physical infrastructure, deliver multiple dividends by building human capabilities across generations, reducing the drudgery and increasing the productivity of women’s unpaid work, enabling women’s labour force participation and creating decent work opportunities. Ensuring that COVID19 recovery policies are responsive to the needs of casual, precarious or informal workers, for example by extending income support and social protection to all workers, will also help to tackle gender inequalities, given that women are concentrated in the most vulnerable and low-paid forms of work globally. This is not to deny that male jobs are also increasingly precarious. But women most acutely experience the intersecting burdens of entrenched gender inequality and discrimination in labour markets, rising insecurity and informality of work, and a heavy burden of unpaid care work.

Increasingly scholars of gender, economics and ecology are theorising these intersections, drawing attention to the connections between the undervaluation of natural resources and the environment, and of care and women’s work. In 1988, Marilyn Waring’s book ‘If Women Counted: A New Feminist Economics’ brought the neglect of both women’s unpaid work and environmental conservation in the United Nations System of National Accounts to widespread attention. More recently, concepts and terms such as ‘depletion’ have been applied across both feminist economics and ecology to understand the way in which both the environment and women’s time are finite resources rather than a ‘bottomless well’ that can be endlessly exploited without consequences. Ideas of ‘sufficiency provisioning’ where we aim for ‘enough’ rather than wealth accumulation, or ‘degrowth’ as an approach to the economy based on redistributive downscaling of production and consumption, (particularly in industrialized countries), are propositions for moving towards environmental sustainability.

Feminist ecological and economist thinking has informed new policy ideas around creating regenerative economies and a ‘feminist green new deal’ based on moving away from exploitative and unsustainable production patterns while investing in the care economy. It is encouraging that some of these ideas are gaining traction among policy makers. For example, Hawaii’s COVID19 ‘Feminist Economic Recovery Plan’  articulates a vision to move away from a heavy reliance on military, tourism, and luxury development to create new ‘green’ opportunities,  ensuring women have access to “green jobs” in renewable energy, energy efficiency, and environmental management and construction, while strengthening education, childcare and health care services.

As governments make decisions that will shape global and national economies for years to come, a ‘just transition’ offers a set of principles for addressing the world’s environmental and economic challenges in tandem, helping to ensure that market-based or technologically driven ‘green economy’ solutions do not undermine the pursuit of social justice and inclusion. Without explicit attention to gender in these solutions, the risk of further entrenching existing gender inequalities as part of any transition is real. A ‘gender just’ transition requires investments that are both green and social – in care services and social infrastructure, policies to support informal or precarious workers, the removal of structural gender inequalities or discrimination in new and existing sectors of employment, and social protection systems that work for women.

However, not all countries are equal in their capacity to make such investments. Developed countries, with greater financial and governance capacities, will need to take the lead in demonstrating the potential of  green and social investments, while also fulfilling their international commitments under the Sustainable Development Agenda to create an enabling environment for developing countries to achieve a just transition. After all, socio-economically privileged populations, primarily in developed countries, have benefitted most from high carbon growth, while marginalized women, primarily in developing countries, have contributed least to climate change but stand to lose the most from its effects.

Albanese, A., 2020. Society Must Not ‘Snap Back’ To Insecure Work And Poverty After Coronavirus Crisis, Albanese Says. [online] The Guardian. Available at: <https://www.theguardian.com/australia-news/2020/may/11/society-must-not-snap-back-to-insecure-work-and-poverty-after-coronavirus-crisis-albanese-says> [Accessed 22 June 2020].

Australian Academy of Science. 2020. What Impact Will COVID19 Have On The Environment?. [online] Available at: <https://www.science.org.au/curious/earth-environment/what-impact-will-COVID19-have-environment> [Accessed 22 June 2020].